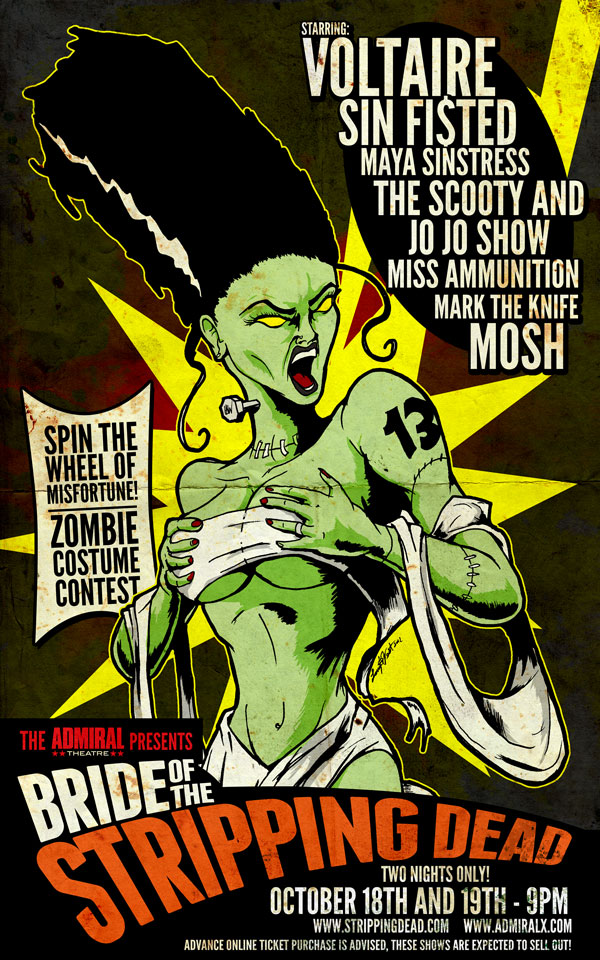 The Admiral Theater in Chicago, IL contacted me about doing a poster for their event, “Bride of the Stripping Dead.” It was a ton of fun to do and the scope was pretty simple: Do a poster of The Bride of the Frankenstein as a stripped with a ton of attitude! I wanted to keep the look of terror everyone was familiar with, but I also wanted to do something kinda nuts.
Over the course of a few weeks, I created a teaser billboard, flyers, posters, newspaper ads, and a T-shirt for their annual Halloween stripping / burlesque event. The billboard was an instant success, resulting in new coverage and a ton of hits on their site! The poster and shirts sold well, and the event was an instant success! 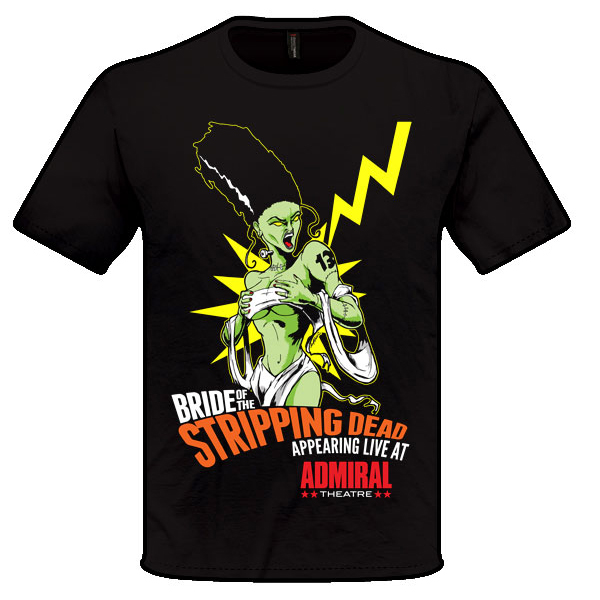 Check out the piece on DeviantArt!

When I heard Wednesday 13 was coming to town, I knew I HAD to do a gig poster for it! He’s one of my favorite musicians, and his mix of horror, punk, and metal is just awesome! He has a sense of humor to his music that gives it a large amount of appeal, and his later work has taken on a more sinister tone that has given it a different life!

I decided to do this as fast as possible because I wanted to capture a mix of the old-style movie posters and the grindhouse ideal as well which were both heavily present in his music. I’m pretty happy with the end result!

WEDNESDAY 13 will be playing The Trocadero October 30th at 7PM!

Art-wise, this thing was insane! I had wanted to do it since August, but I never had a solid idea. With less than a week before the show, I knew I wanted to do something, so I came up with an idea Monday and Tuesday after I got home from work I went ahead and tried to do it full-tilt!

I wound up laying out everything twice, the second time just ignoring any of the rules I knew and having fun with it! That wound up being exactly what I needed, and I think there’s a good feel to the illustration that makes it come alive! I also did a live-blogging of it while working on it.

The hardest part, just like all of my posters, isn’t the illustration itself, it’s designing the actual poster. I got to it around 11:30AM and thought it would only be 30 minutes. How wrong I was! The design was the single hardest part of this piece!

I wound up using a bunch of grunge textures on it because I definitely wanted the piece to look a little old, but at the same time I wanted to make sure the colors still popped.

More than anything, though, I’ve wanted to do a great Bride of Frankenstein drawing for about 3 years now. I never really tried until I had an idea I loved, and I hope you enjoy it! She’ll be used in another piece soon! I did a photo shoot with two awesome goth / alt models Jernike and Chrissy in an abandoned factory in Philadelphia. It was  a hell of a shoot, involving danger, hobos, blood, and dying batteries! Thrills and chills awaited us in the shoot, and I’m glad to share this with the world!

Check out the full set of “Hell Needs Women” on Flickr! 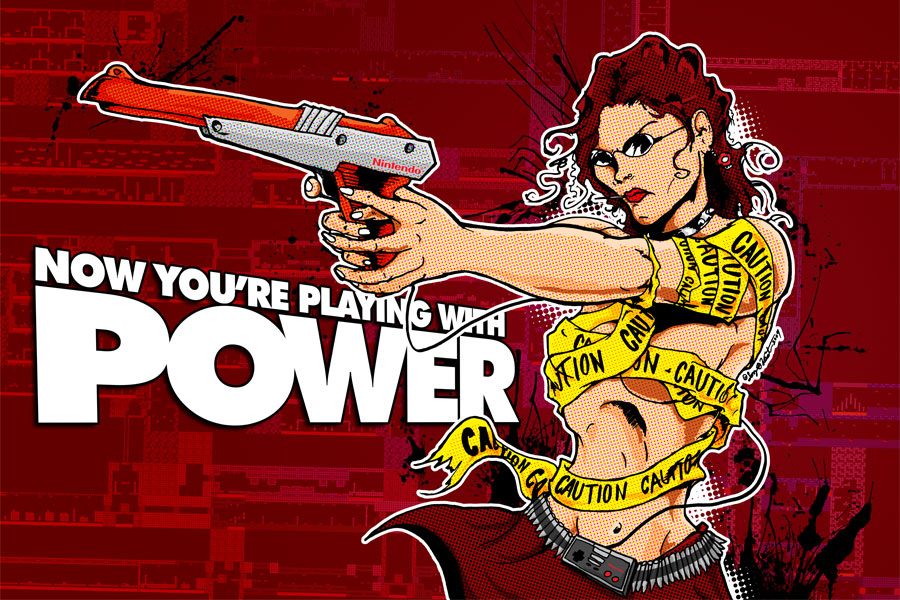 I did this piece for an upcoming art show called “8-Bit and Beyond”, which is being held by The Autumn Society of Philadelphia, a group of illustrators from Philly and the surrounding areas. It was really humbling to get to do something for it, and I was really psyched to get it done! My friend posed for this and, well, it was a ton of fun! Mixing illustration with pop-art techniques and elements of 80’s graphic design… good times!

Special thanks to everyone who supported me in this, and I can’t believe what I went through to get it done! From taking risks by just doing the sketching and seeing what happened, inking it a lot more loosely than I normally do instead of being incredibly rigid, the adventures of going to Center City to get a reduced copy only to realize I left the original on the copier and being forced to get it back, to coloring it…. Just so much fun!