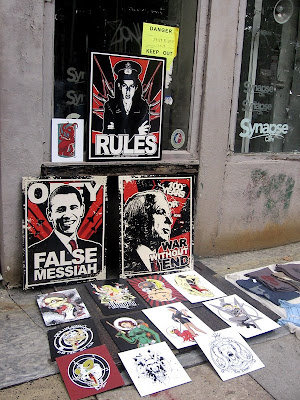 In a previous post, I outlined, in very blunt terms, what I thought about the Philadelphia Art Scene and why, in turn, I despised it.

Last night I did my 3rd First Friday and my second of the year, and it was really interesting seeing people react to my art. I was surrounded by basically what you would expect: Framed photos of buildings, silk-screen t-shirts with abstract designs, and hand-made prints. Across the street from me was Geek Boy Press, setup not too far from Brave New World’s comic book shop who was holding the “8-Bit and Beyond” show for the Autumn Society.

Then… there was me.

I was set up next to Christ Church, mainly because it was the last spot I could get on the lower-half of 2nd Street. Since my pallet is mostly primary colors… well, it’s hard to miss me. I had all my prints mounted and on display, and the star of it all was my “False Messiah” piece hung in the recessed side of the church, creating a sort of alter for it. Reaction was generally positive, and whenever anyone asked what the piece meant, I was able to explain it pretty easily. I was a showman through-and-through, doing my best to sell myself and personality to people who were interested in my work, giving out my card and whatnot.

It was refreshing. The previous month I felt largely ignored, but looking back, it was largely because I wasn’t on a good side of the street more than anything else. Getting positive feedback is good, ad even negative works well. I had some lady say, “You suck!” because of my Obama piece and then run off. Coward.

I came back home to a bunch of hits on my website and some e-mails. I’ve gotten a few requests to do gallery shows in the coming months, some for interviews, and from people who liked my work and wanted to buy prints. Working since February on my art show in May was a big deal and June was a fairly quiet month in comparison. In a lot of ways, it was the only month I had off and now I’m doing as much stuff as possible.

I wrote in the pass that the Philadelphia Art Scene annoyed me for one reason or another and, in reality, I now see what the problem is. I learned that it isn’t the art scene that’s the problem. No, that isn’t it. The problem isn’t with the galleries, either, and I’m willing to admit off the bat that I haven’t tried to do a “gallery” gallery show yet since I don’t have the money to get Gicelle Prints and a lot of fancy things. No, the problem is with what certain people think is “good” when, in reality, they seem to be out out touch with what people like.

People like a pop-artist who will tell them to their face that the person they admire suck and is willing to actually be himself. Who knew?