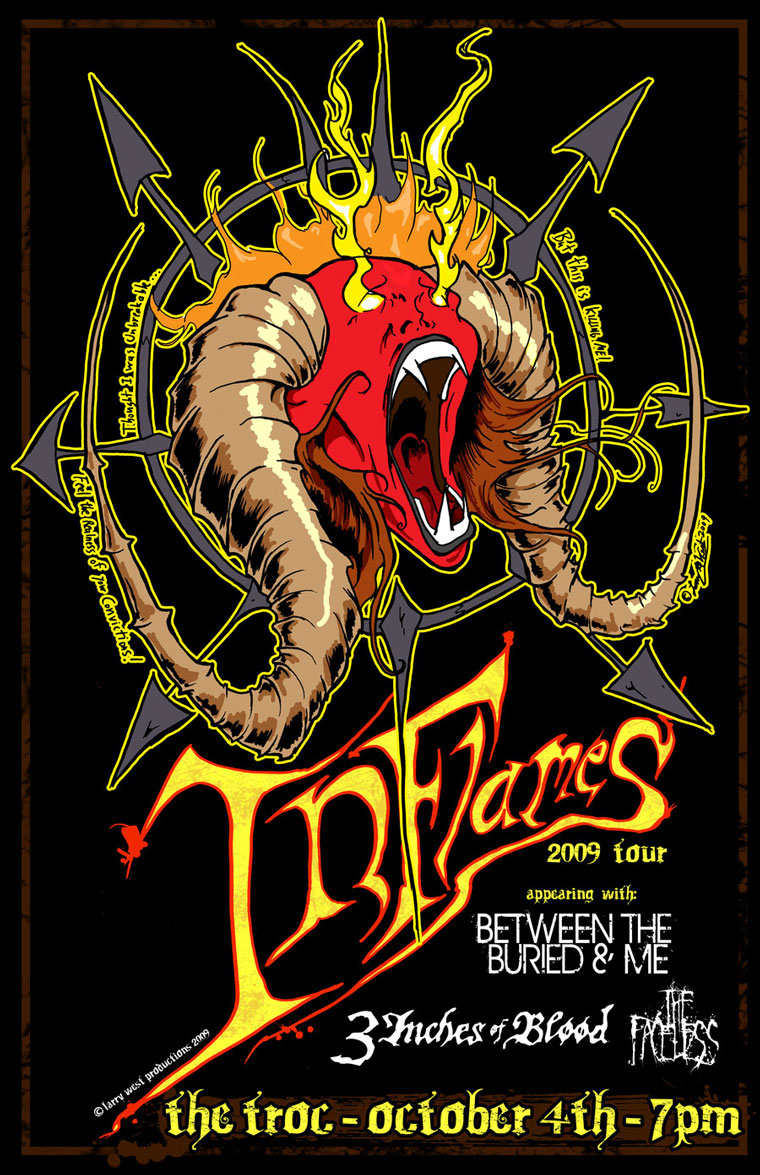 This is another poster I did for fun: Again, not commissioned by the band or the venue, but me trying my damnedest to help both.

I was on the train home this time around when I started sketching out the layout of this piece. I threw on “Come Clarity” and just started to draw what came to mind. A big-horned Demoness with flames coming out her eyes…. man, I wonder what THAT means? Seriously, I wonder what my subconscious was trying to scream out at me about.

I’ll post the sketch soon, but I was really happy with the way the sketch came out. On top of that, I had already done a quick sketch for the Obituary poster that I’ve already posted, so when I got home I went straight to my art studio and cranked out the pencils in about 30 minutes. No, I’m not kidding. 30 minutes. The Xecutioner took about an hour or more because the pose was hard to get, along with the proportions… but that’s another story.

The next day I went back to working, this time inking everything. I had wrapped up inking on the Xecutioner, and I was a little worried about this one (again, another story), but there was a really nice, easy flow to this one. The fact that this one wasn’t even close to being as urgent helped. The inks on this were about an hour or more, and it involved doing the logo on a separate piece of paper. If you look at the pencils, even my scanned-in inks, you can see I had plotted out the logo. I took a piece of copy paper and a light table and inked the lettering onto the paper.

Scanning in everything was easy, and coloring it was fun. I made it as simple as possible and decided to stay as true as how I would do it by hand as possible. I’m contemplating doing a “painted” version one day, but for now, I’m thrilled with this.

Behind the screaming demoness is a symbol. Now, those familiar with In Flames will see something familiar yet strange. In Flames has adopted a few symbols over the years, and there was a sort of tribal one used back in 2006 for Come Clarity. I decided to take the idea and make it my own. In this case, it involved turning it into the symbol of chaos as well.

There’s some writing on the original piece, but I had to take it off the smaller versions of the posters because it didn’t read well. I was listening to “A Sense of Purpose” while penciling it in and one lyric in particular came to mind: ” Feel this up your conviction!” To me, though, it sounded like “Feel the Realness of Your Convictions!”, thus the name of the piece. The lyric is from the song “I’m the Highway”.

But while I was listening to the album, another lyric came screaming out to me: ” Thought I was unbreakable, but this is killing me!” This lyric is from “Delight and Angers”, and it just felt perfect. Now, as soon as I wrote it, I was worried about the way people would interpret that. I didn’t want it to look as if I was saying, “Oh no, Satan is evil and will betray you!”, but its more along the lines of two old sayings: “Pride comes before the fall” and “Be careful what you wish for.”

IN FLAMES is playing The Trocadero October 4th at 7PM. They will be joined by Between the Buried and Me, 3 Inches of Blood, and The Faceless.