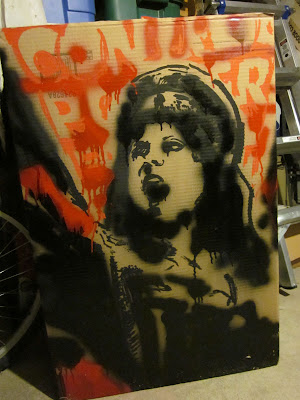 To say there’s a bit of a disconnect between people who do street art and graffiti and everyone else is a bit of an understatement.

For basically my entire life, I’ve had the viewpoint that most graffiti (99.99%) was junk and should be removed, especially on stuff around where I lived. I still think that, though the percentage is down to a whopping 98%. But about 2 years ago I met someone who actually just opened my eyes to this world. Through this person, I learned to appreciate it more and more as an art form, something I had begun doing for a while but this person really brought it out of me full-force.

Tonight I finally took a plunge. No, I wasn’t tagging property. Instead, I decided to just decorate a piece of cardboard.

Its actually a practice for a large piece I’m working on for the garage door. I was talking to a few people before I started tonight about what to do and how, exactly, to even start. Should I get those caps that adjust sizes? Should I get paint markers for small details?

In the end, I learned a few things. For starters, next time I’m wearing a mask. The fumes, man, the fumes… Second, I’m better with a can than I thought. There was a lot of over-spray, I had more feathered edges than I would care for, but for the small piece on cardboard, it worked great! Seeing the paint slowly drip over the piece, especially the red, on a propaganda-style piece made it look even better to me! I need to get a new red paint marker, though; the hue on it is far too bright and pinkish, but that could change once everything dries.

It was a ton of fun, I might do more pieces like this, and I’m looking forward to the garage door now.