I started inking a new piece and I decided to do a little self-serving thing and talk about my “process”. I like inking by hand, its something I’ve always enjoyed. Later we can discuss that, inking over originals, etc… When I was in college, I thought about getting a job as an inker since it was, oddly enough, it was one of the things that was kinda calming in art. Its an art form in and of itself, but its a really nice way to relax.

So what does an inker do? Well, Chasing Amy did a good job of explaining it:

Which, oddly enough, is part of the reason I didn’t get a career as an inker, as well as why I made this tutorial; to show what an artist does in terms of inking their own stuff.

Step 1. One problem I had for years was not being happy with the line weights and getting something consistent. In order to change this, I decided to do something different: Start with a small pen and work up. Sounds simple, and to a degree it is. 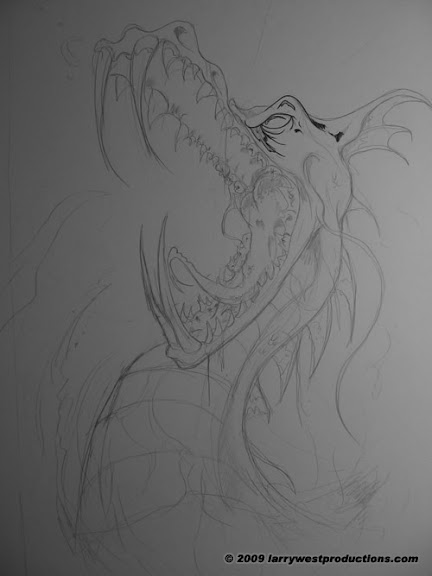 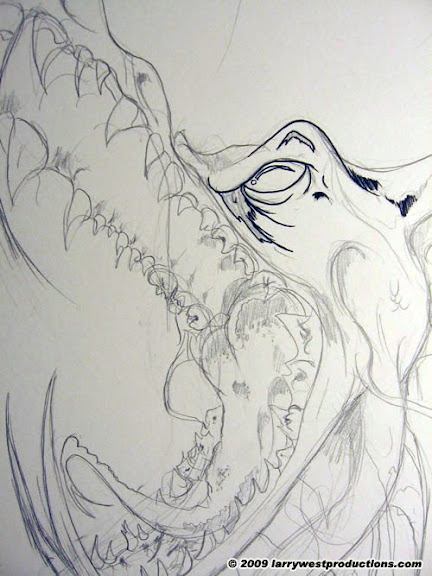 So I start by mapping out most of the detail I want and some basic shapes. I tend not to work on the outlines yet and wait until later to give them extra power.
Oh, and listening to KMFDM helps. A lot. For some odd reason, it helps me to concentrate. 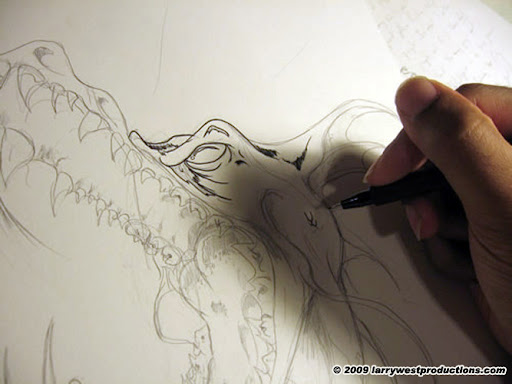 Step 2. With all the fine details done, its now time to start using another pen to start adding some emphasis and details. Now, one thing people may ask is what type of pen I use. Well, until 2003, I didn’t have a standard pen. I, like everyone reading this should, used a lot of different pens to get what I liked. I went from Straddler Rollingball pens and Sharpies to Micron Pens and Sharpies. I’ve never been good with a brush, and I envy the guys who did!

I use something called Faber-Castler PITT Artist Pens. They come in 4 really simple sizes: Small, Fine, Medium, and Bold. Simple, right? They use actual India Ink and the Bold is a brush. The downside is that the Bold dies faster than the others so I tend to buy more of them. If I need to do a really bold outline or some really interesting effects, I take out a brush and a bottle of India Ink.

So, at this point, I’m using the Fine pen to map out a lot more places. 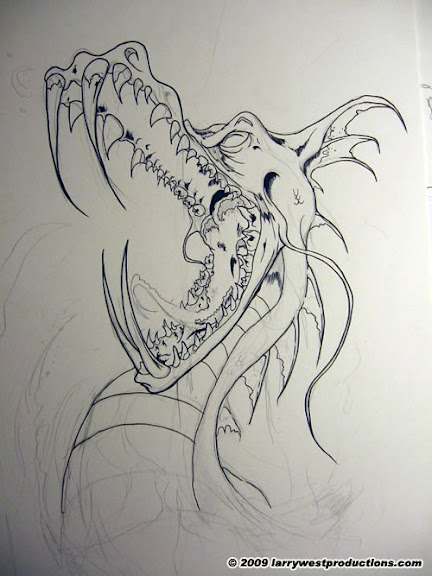 Step 3. OK, this is where it gets tricky. Everything from here on out is nothing more than knowing what works and what doesn’t, and trying to make it all make sense. At this point, I take out my Medium pen and start working on some more of the thicker lines. In the case of this piece, its mostly based on perspective, so the more something is upfront, the thicker I make the line. 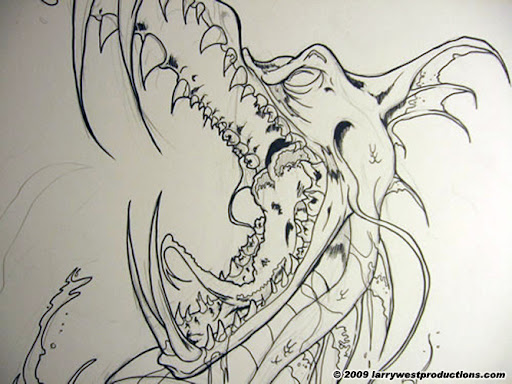 Step 4. I consider this the part where I make the piece sing! I take a Bold pen and start adding the dark shadows and really thick lines. Its actually interesting how I got to a point where I use a thick line around most of my work! In 2003, I met Joseph Michael Lisner at Wizard World 2003. At this point, I had met him a few times and I had just finished inking my first comic book (which… well, I won’t show it to anyone these days). I also showed him my first attempt at drawing Tattoo Flash art. He looked at the two and asked, “Hey, did you ever think about putting a bold line around your ink work? It seems to lend itself really well to it.”

I’ve done it ever since. 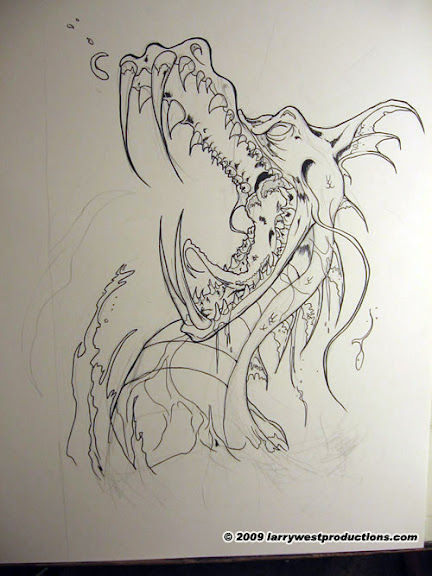 Step 5. Well, after all the hard work, we have a finished piece… or, really, an almost finished one.

From here is just refining and taking care of details before scanning it in. I need to erase all my pencil lines and certain things pop out more than usual at that point and really, its not as interesting as you may think.

Oh, and the nearly-finished inks: 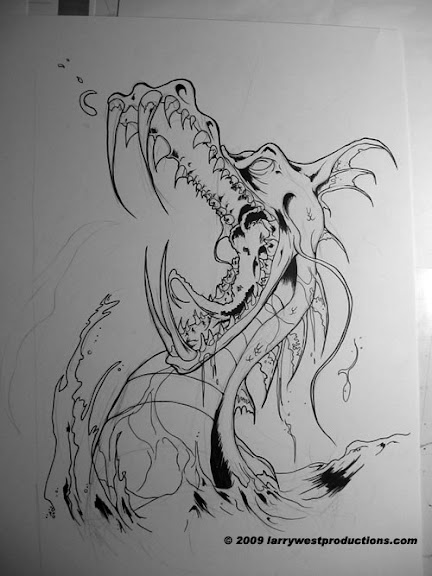 This time, the pools of black REALLY helped to make it pop! I was worried about if it would work until the very end when I got to this point, and it really was worth it, you get a sense that this thing just emerged from the water and is read, and willing… TO KICK YOUR ASS!

Look out for Part 2 soon!