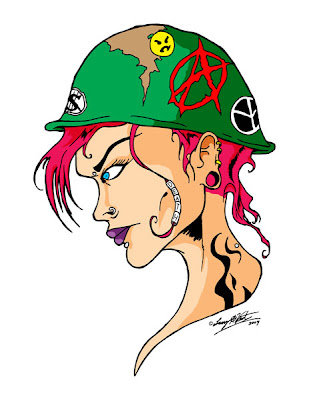 So, I want to address something that comes up a lot, and that’s me working on comic books.

One common thing I hear whenever I show my work to just about anyone is that I should do comic books. When I started to draw, and I mean REALLY get serious about then in 1998 when I was 13, it was because I wanted to draw comics. Bad. Really bad. That’s virtually all I wanted to do throughout high school and most of college.

I wanted to do a book for years and years, and I have one book series in particular that I really want to do, and have since 1998. It went through a bunch of reforms, ideas, reinventions, etc, and I actually had a few finish issues. So why is there no comics? Why is there nothing online about this?

In truth, there is. Morise Comics was the name of the company I started, and the domain is where I host all my art. I posted some pages, merchandise… everything. In fact, its still around only to see if there’s any interest. But because I wasn’t happy with everything, I scrapped it.

Over the last five years, the originally idea went to the background and I decided to simply start over. That, in turn, went back and I let it go. It wasn’t easy, it wasn’t enjoyable, but it had to happen. In 2007, I had an idea for a book based on a sketch, and I really enjoyed the idea and concept, and I decided to knock this out as a series before working on the series I had basically spent 9 years developing.

And here we are today.

I haven’t published, in nearly 12 years, one comic book. I’ve had ideas and ideas, and more sketches than I can name. I’ve rewritten the script for the series I want to do now more times than I can count, and I can’t commit to something I like. Its frustrating and irritating, and to a point, devastating. You can’t imagine how many times I’ve done to my art desk to start on my book, only to stop, stare at the paper, and walk away because I wasn’t happy with something.

The pencils aren’t good enough, the backgrounds don’t look right, the style of the book is inconsistent, I didn’t leave enough room for a word balloon… it really sucks. I KNOW I can knock out a great comic, I know I can write an incredible series, and I KNOW I can do something awesome!

Is there a comic book in progress right now? Yes. Will I ever get it done? I have no idea.

Non-Sequiter thanks to GoComics and Wiley, Inc.

I love Non-Sequiter, it’s one of my favorite comic strips of all time. This one… I won’t lie, it has me really confused.

I’m not 100% sure what he’s referring to. Is it to people on Deviant Art who give away, literally, their rights to brushes and patterns so people can download and own them for free? The large number of people creating comic strips for free online with hopes someone is going to donate to them or buy their stuff?

OK, NOW I have an idea! Wouldn’t be shocked if this was a trend for today’s comic.

Thanks Pearls Before Swine!