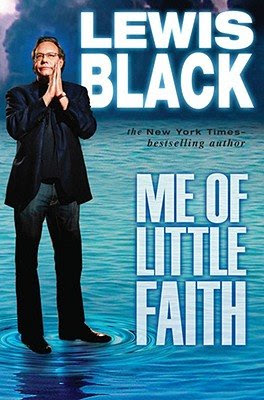 I just got done reading Lewis Black’s “Me of Little Faith” two days ago. While it has a bit to do with religion and a bit to do with his personal life, it has two fairly big moments about writing. As someone going through an artistic spiritual crisis, these parts spoke to me pretty loudly. I really enjoyed the book, so it was shocking for me to see him write, on more than one occasion, that the hardest part of writing the book… was just writing.

He conveys that sometimes he would stare at a blank screen and have no idea what to say. Lewis Black. My god. Wow.

His solution was simple; Just write.

Turn off the little critic in your head, or at least do everything you can to ignore it, and just write. Sometimes it’ll lead somewhere; sometimes it won’t. He wrote that some of his best stuff came from just sitting down and writing something and seeing where it went.

As a teenager, that used to be my philosophy, or really just what I did more than anything. I didn’t think about people thinking my work sucked, or that it wouldn’t lead anywhere. Instead I just drew because I loved it. But over the years, because of teachers, classmates, and partly thanks to the internet, I started to doubt myself. It got to the point where I rarely every drew for the joy of it. Instead, I always did sketches in my countless sketch books, and periodically made one into a full piece.

That actually stems from something that happened way back in high school. I’m fairly strong at composition, and I had someone teaching me on a weekend course who asked me to show my thumbnail sketches of a piece I had been working on. I told them I didn’t have any, and she was shocked and asked that I make some to show the class to prove that I didn’t just come up with it but it took more work than it really did. It basically grew from there. There’s an Ayn Rand reference in here, I’m sure.

Yesterday I decided to take his advice and just draw something. At first it was based on a sketch, but it grew into something else entirely after I didn’t like the original piece. After sleeping on it and going back to it the next day, I actually started to really enjoy the piece and started developing more and more stuff into it. It was partially inspired by about 10-20 sketches I’ve done over the past year, but it felt really natural to do.

I have some sketches I did today that I do plan on developing soon, hopefully in the upcoming week. There’s a few other things in the work as well. It just comes down to just doing it.